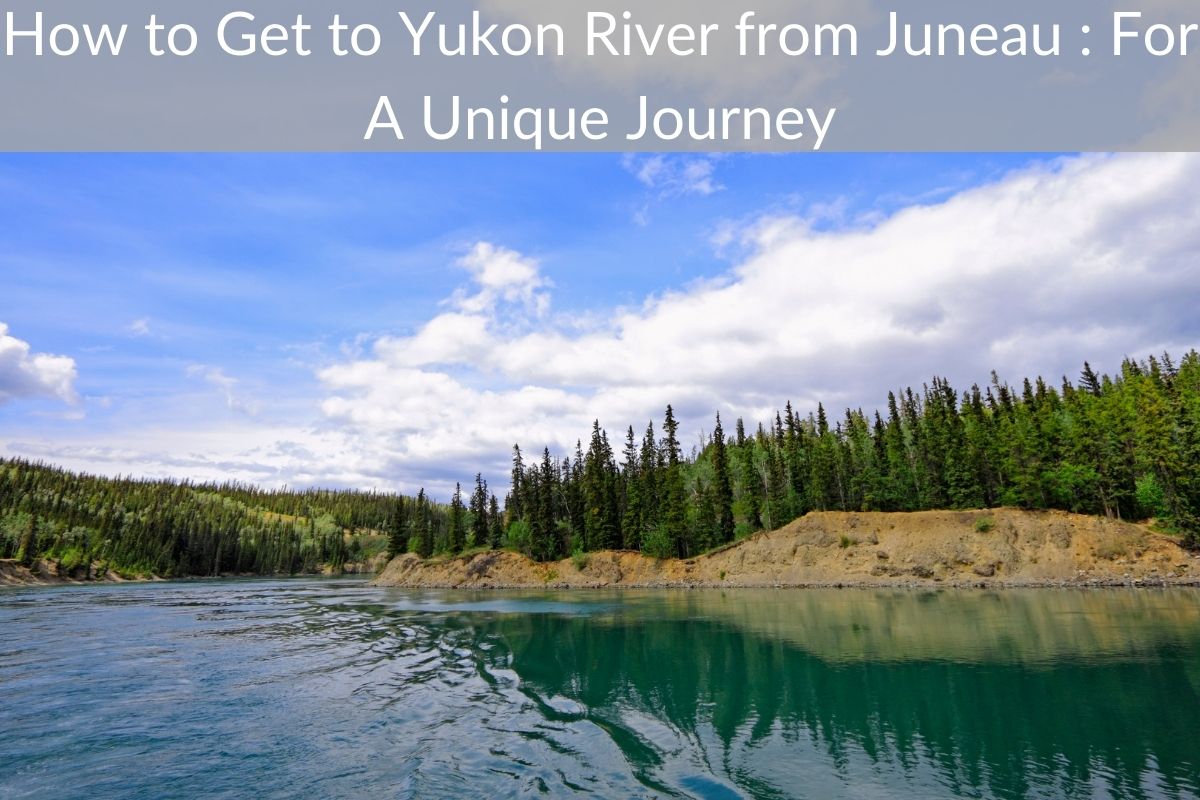 Four Steps to an Unforgettable Journey to the Yukon River

Alaska was made for unique journeys.

Alaska’s capital, Juneau, is an island, with no roads in or out of the city. The rocks, tides, and beaches of the island are too wild to maintain good roads. It is unique among U.S. state capitals for this reason.

The Yukon River is the longest river in Alaska, and the third longest on the continent. Its tributaries spread throughout the state, from a main body of nearly 2,000 miles.

If you love Alaska, you should make the journey from one to the other at least once. We’ve got all the recommendations to get you moving.

How, then, do you get to the Yukon River from Juneau?

There are, of course, opportunities for flying. But those aren’t nearly as fun as driving.

1. Fairbanks: So Close, and Yet so Far

First, pick your destination. It is thousands of miles of river, after all, and much of it flows through territory that, in addition to being breathtaking, is barren, cold, and completely inhospitable. Your final destination will need to be somewhere you can relax, and possibly fly out of the state if you have to.

The best major city from which to explore sections of the Yukon River is Fairbanks. There’s a boring downside to this – Fairbanks itself isn’t actually on the river itself, but a tributary of a tributary. In short, the Yukon branches off, and branches off again, and that section, the Chena, runs through Fairbanks.

If that seems like a cheat, it isn’t – it’s just a testimony to how massive the Yukon is. Fairbanks, too, places you quite close to Denali National Park and Preserve, which itself borders Nenana River, another tributary of a tributary of the Yukon.

Fairbanks, too, is the closest populated stop before the nearly deserted Tanana Valley, which itself is right on the Yukon. If you’re going to explore the river, the best place to set up base camp is here in Fairbanks.

Our journey, then, is from Juneau to Fairbanks. As luck would have it, the first leg will be on a ferry.

No matter which way you go, you have to start on a boat.

There are two ways to Fairbanks, by car, from Juneau – one is a 732-mile journey which, after a ferry, will cross over into Canada and ride the northern edge of two Canadian national parks, both connected to Canada’s Wrangell-St. Elias National Park and Preserve. Most of the drive will be on two major highways which cut across Canada back into Alaska. This route will take you through the city of Haines, the Canadian wilderness of Tatshenshini-Alsek and Kluane National Parks, the gorgeous and secluded Tanana Valley forest, and eventually to Fairbanks.

The second route involves a much, much longer ferry to the city of Whittier, from which you can either drive, or ride the Alaskan Railroad, to Fairbanks.

The ferry cost from Juneau to Haines, for two people and one vehicle, is about $300. If you’re on a budget, this is very likely the option you’ll be taking.

The ferry route cuts through Lynn Canal, one of the most breathtaking aquatic stops in all of Alaska. Lynn Canal is a fjord, an inlet of water right between two sets of cliffs, and it’s deep – the deepest, and longest, in all of North America. It stretches out for just over 100 miles, and you will likely spot seals, whales, sea lions, and eagles on the journey north.

Day cruises make their living by taking tourists up and down these waters, and though you won’t have access to a guided lecture, you’ll have the chance to see the same sights and wildlife as everyone else paying for the luxury. The ferry is five hours long. Stay outside for every minute of it, if you can.

The ferry from Juneau to Whittier is considerably more expensive – rather than just under $300, you’ll be spending roughly $1,300 for two and a vehicle. The extra grand is covering quite a few more miles.

If cost isn’t an object, however, this ferry will take you hundreds of miles across the Alaskan coast. You’ll be too far out to see glaciers, but you’ll have plenty of time to see wildlife.

As far as scenic routes go, while the ferry is a wonderful chance to see the coast, it’s best to remember it’s primarily a method of transportation. If it’s scenic views you’re after, your best bet is the train. The ferry is a means to that end.

Under no circumstances should you just pass through the city of Haines.

Haines is right atop the Chilkoot and Chilkat Rivers, two bodies which, in addition to fishing and paddling, offer one other unique attraction – hundreds and hundreds of bald eagles.

You’ll have to come at the right time, naturally. But each November, well over 3,000 bald eagles gather here to eat the salmon that are floating back towards the sea after spawning. The Chilkat River, for some magical reason – either because of the chemical composition of its gravel bed, or the incoming waters of the Chilkoot – doesn’t freeze. This means the fish within it, exhausted from their trip upstream to spawn, are either dying or just recently dead. It’s a once-a-year feast for the eagles, which descend in droves to devour the salmon.

It’s fitting, of course, that Haines would be host to the Chilkat Bald Eagle Preserve. If you’re here in November, this is something you’ll never see anywhere else in the world.

On a minor note, Haines is also host to the country’s only Hammer Museum. This stop is well worth your while, and needs no description – it’s exactly what it sounds like.

Haines, too, has a distillery, for the evening hours.

Whittier, unfortunately, has neither eagles nor a hammer museum. It does have a great variety of watersports, museums, hiking trails, and a sizeable handful of marine parks.

You might be tired of water after the ferry, but if you’re up for it, boat and jet ski rentals are available, and there’s plenty of open water to ride. Several well-known glaciers and glacier trails can be reached from here, including Portage Glacier, a rapidly retreating body of ice that needs to be seen before it disappears.

Whittier also hosts Prince William Sound Museum, which has far fewer hammers than Haines, but far more information about the history of Alaska, including the devastating 1964 earthquake, a record-setting quake that sunk entire towns into the sea.

From Haines or Whittier, it’s a near-straight shot to Fairbanks. The choice is between car or train.

Haines to Fairbanks, through Canada

If you’re on a budget, this is your likely option. Gas costs, all in, will probably be just over $100. There won’t be many stops on the way to Fairbanks, but the scenery is unmatched – most of your Canadian leg will be alongside and through the Tatshenshini-Alsek and Kluane National Parks, two Canadian national parks that, together with Alaska’s Wrangell-St. Elias Park, form one large protected area of forest and glacier. It is extremely difficult to travel to this area by car, so count yourself lucky that you’re able to see it.

After you enter Alaska once again, you’ll pass through the Tanana Valley. This is the area to which you’ll return if you’re exploring the shores of the Yukon itself. Camping and fishing here are unmatched, but be forewarned – you’ll have to bring everything you need, because there’s literally nothing out here but the wilderness. Which, to be fair, is part of the allure.

Whittier to Fairbanks, by Train

The cost of the train, from Whittier to Fairbanks, is somewhere between $500-$700 for two people. It’s a lot more than the cost of gas for driving through Canada, but with one significant advantage – you’re not driving, and you’re taking a historically linked trip few will ever get to see.

The Alaska Railroad is over a century old, passes through some of the most beautiful areas of the country (including Denali National Park and Preserve), and allows for each passenger to enjoy the sights while wining and dining the afternoons away. Fairbanks itself is one of the earliest stops ever constructed on the railroad.

Different portions of the track are open at different parts of the year, so your journey to Fairbanks might include slower treks over mountain ranges in place of faster journeys through flat and wilderness. Be advised, too, there’s a good chance this journey will be unique in ways you couldn’t possibly guess – one portion of this track is, during the summer months, the only transportation for locals. The train itself stops not at predetermined places, but wherever a weary traveler waves a white flag. This isn’t a system you’ll see anywhere else in the U.S.

Fairbanks itself is far from just being a base camp to explore the Yukon River and the Tanana and Nenana tributaries.

The city is one of Alaska’s main destinations. It boasts theme parks, native American villages, wildlife refuges, and museums, including an ice museum and an automobile museum. Restaurants and brew houses abound. There’s no shortage of things to eat, see, or do.

Here, of course, is where you end up after traveling through Alaska to get to the Yukon. But how do you explore the river from here?

First off, know your transportation. If you’re renting a car, get an SUV. Anything else isn’t likely to be allowed, as the roads – Dalton Highway in particular – can be far too rough on weaker rental cars.

Second, know what you want to do when you get there. Most people visit the Yukon River to take in the sights, but if you were planning on, say, rafting down the waters, you’ll need to have a detailed plan, and one that files paperwork with the local authorities.

This is one of the largest bodies of water in North America, and the coldest, and its docile nature shouldn’t fool you into thinking that it’s not dangerous. Don’t stay out too late, don’t float on your own, and don’t explore or drive with no visibility. Alaska is still wilderness, no matter how civilized the journey.