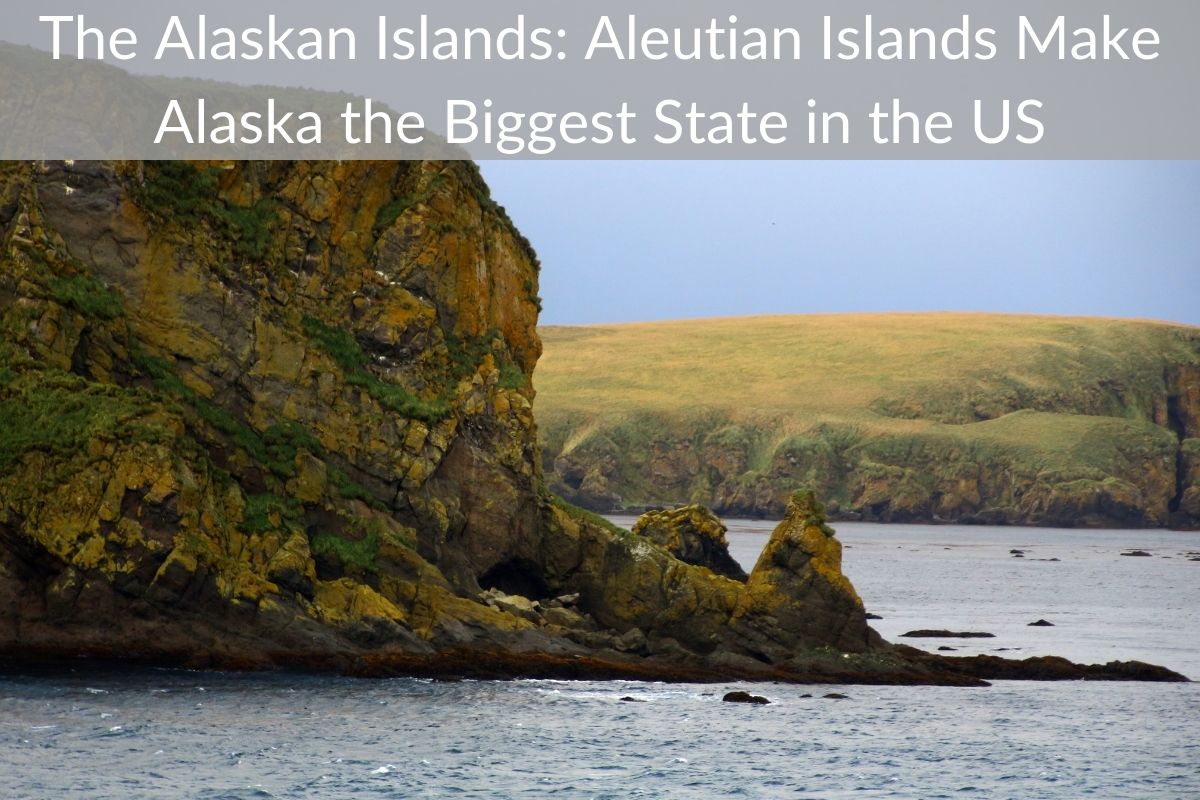 Alaska is by far the biggest state in the United States, Texas coming in second place.  Alaska is made up of an estimated 2,670 named Alaskan islands, earning its title and place as the largest state.

Of these great 2,670 islands, the Aleutian Islands make up a total of 69 of those islands and an astounding 1,100 miles.

To fit all these 69 islands and numerous islets on a single Aleutian Islands map would take a huge amount of paper.

But, what exactly are the Aleutian Islands and how do they make up the majority of Alaska’s massive size? Here is a quick crash course about these fascinating islands that will have you knowing their beautiful locations like a native Aleut.

The Aleutian Islands is Simply a Big Chain of Small Islands

The Aleutian Islands is made up of small islands that ultimately build a long chain that lasts for about 1,100 miles across Alaska.

These small islands also serve the purpose of separating the Bering Sea to the north from the Pacific Ocean to the south.

Not only does this chain serve as the border for the Bering Sea and south side of the Pacific Ocean, but it also extends from the tip of the Alaskan Peninsula and ends at Attu Island, covering a massive amount of the state.

This obviously goes to show that the Aleutian Islands contribute very much to the state of Alaska.  Of the state’s approximately 663,300 miles, these islands provide it with over 1,100 by far.

Alaska is known for its cold weather, but also for its beauty.  The islands that contribute so much of this gorgeousness are those such as the Adak Island, Admiralty Island, Baranof Island, Douglas Island, Fox Island, Montague Island, and the Kodiak Island.

Furthermore, a lot of these beautiful islands are classified as Aleutian.

The Aleutian Island is a total of 69 islands, and of those 69, 14 of them are large islands and the remaining 55 are smaller ones, plus a countless amount of islets.

Of these many islands, some of the most popular ones for sightseeing and known for their beauty are Fox Island, Islands of the Four Mountains, Andreanof Island, Rat Island, and Near Island.

While most of these islands are part of America, some of them belong to Russia.  An example of this is the Komandor Islands (also spelt Commander Islands), which are located near the Kamchatka Peninsula, Russian territory.

The Volcanoes of the Aleutian Islands

The Ring of Fire, formed by a segment of the circular chain of the Pacific Aleut islands, is the result of these volcanoes and contains many of uninhabited regions.

The Cleveland Volcano is a very special one to the Aleutian chain.  The western half of Chuginadik, an uninhabited volcanic island, is formed by the Cleveland volcano.  Consequently, it also forms parts of the eastern Aleutians because of its relationship with Chuginadik.

To form this bond, the Cleveland volcano is connected to the eastern half of Chuginadik.  This is made possible by a narrow isthmus.

The Cleveland volcano is also one of the region’s most presently active volcanoes.

The Aleutian Islands History Goes Farther Back than Many Know

The Aleuts were the only inhabitants of the Aleutian Islands for an estimated 8,000 years.  However, they were extremely scattered throughout the islands, and there was a total of 25,000 of them by the time the island were beginning to be discovered by Russia.

Russia was by far nowhere near a blessing to the Aleuts, but a curse.

Back in Russia, the islands were known for their massive supply of furry animals after a voyage lead by Vitus Bering and Aleksey Chirikov.

The Komander Islands were therefore overflowing with Siberian hunters, who eventually moved more towards the east.  As they migrated eastward over time, they found themselves deep in the mainland of Alaska.

By that time, the Aleuts were almost extinct, as nearly all of them were murdered, relocated, and taken as slaves by the Russians.

Finally, a glimmer of hope could be seen rising above the Alaskan mountains when in 1867, Russia sold Alaska and all of its islands to the United States.