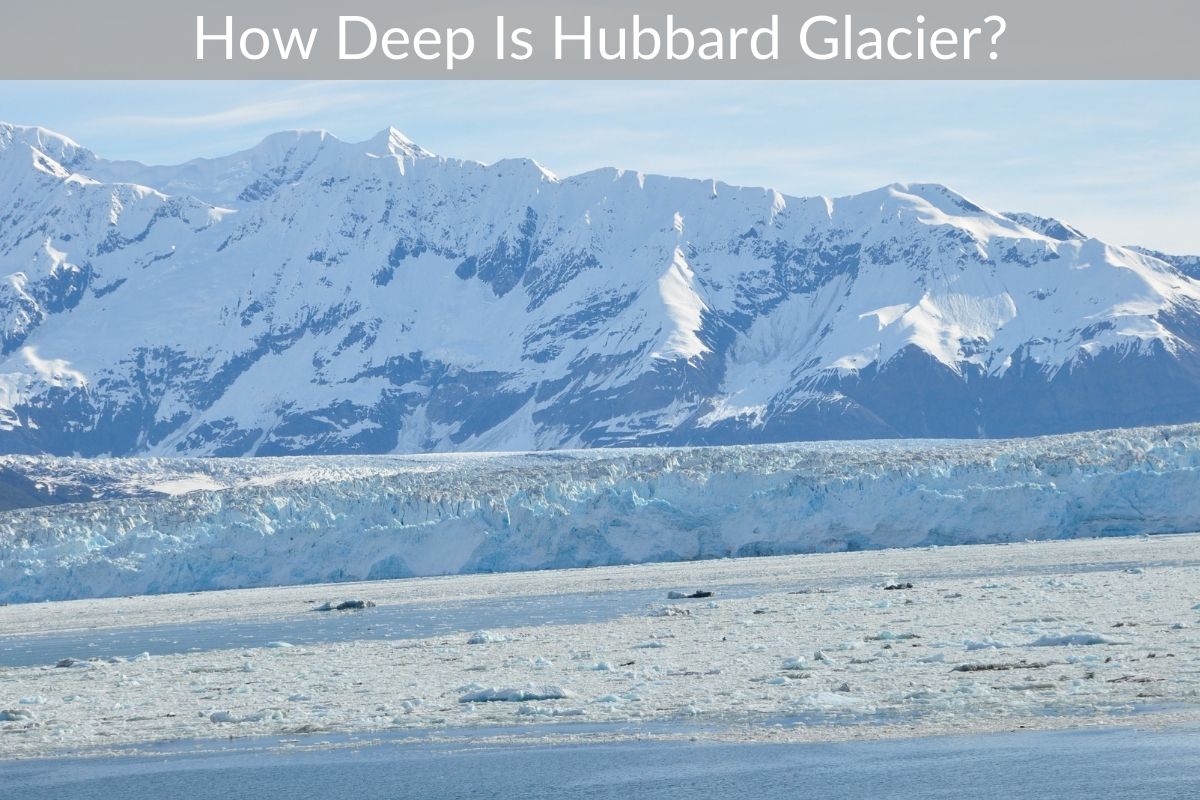 A nature-loving sightseer’s dream, glaciers are magnificent landmarks that exemplify the grandness of the wilderness.

Glaciers loom and flow all over Alaska’s last frontier, covering 4.5% or 29 thousand square miles of the state.

It’s a popular stop for ships on Alaskan cruises – the glacier’s terminus will calve (or lose ice chunks of itself that dramatically split off the main glacier mass and fall into the water where they float like submarines) often and leave everyone who sees the drop filled with awe. The glacier face is 400 feet tall, so some icebergs that calve off into the water can be the equivalent size of 3 to 4 story buildings.

Hubbard Glacier is a great place to visit, although when the weather gets too cold it can sometimes be difficult to navigate the ship through the ice chunks to get as close to Hubbard Glacier as most would like. If you’re lucky, the right conditions will come together and let the ship get within half a mile of the glacier face for you to take it all in.

The glacier was named after Gardiner G. Hubbard in 1890. He was the first president of the National Geographic Society and regent of the Smithsonian Institution.

Of the 100,000-plus glaciers in Alaska, Hubbard holds its own spectacle at 76 miles long and 1,200 feet deep. It’s 25% larger than the state of Rhode Island. The line where the glacier meets the sea (and where most cruisers get their chance to see the landmark) is itself 6 to 9 miles wide.

If the numbers depicting the glacier’s size haven’t already impressed you, consider the time and the process it takes to form a glacier: after hundreds of years of snow falling and gathering in the same place, glaciers form from the mass compression of snow on snow, crystalizing into ice from the pressure. When the glacier’s weight eventually becomes too much on itself, the bottom layers of the thick crystallized snow pile deform, and the newly-formed glaciers advance downward from their typical high-altitude birthplaces and swallow everything in their way, grinding it all into silt moraines as they move.

Glaciers have the power to carve valleys and lakes out of the earth just by passing through. Their every movement changes the topography of this planet.

As a whole, glaciers aren’t faring so well as climate change sets in. Oddly enough, Hubbard Glacier is an exception. Despite the worldwide trend of shrinking glaciers since the 1940s, Hubbard Glacier has actually been thickening as it continues its advancement into Disenchantment Bay and beyond.

Hubbard Glacier is nicknamed the “galloping glacier” because of its fairly rapid (for a glacier) descent toward Disenchantment Bay. Glaciers behave like incredibly slow rivers of ice – they flow very slowly.

The advancement or retreat of a glacier’s terminus depends on the snowfall that melts down or flows from its catchment basin. Hubbard Glacier’s catchment basin is in the Saint Elias Mountains and has a big accumulation area (95% of the glacier as a whole) which allows the terminus to advance as long as the accumulation areas (places where snow and ice are added) stay larger than the ablation areas (place where snow and ice are lost).

This is true for the other seven Alaskan glaciers that are growing and advancing too – in addition to large accumulation zones, all eight calve into the sea over shallow submarine moraines and sit above long fjords. They also went through retreats in the past 1,000 years, when most of the other glaciers were thriving. Again, these eight glaciers are the unusual ones. Most of the other studied glaciers are negatively impacted by the ongoing climate change – they’re retreating, which is problematic for people who rely on glacial water to live.

The glacier isn’t surging right now, but it’s likely due to surge again soon – there were two instances in the past 100 years (1986 and 2002) when Hubbard Glacier blocked Russell Fjord from draining with its calving ice shards and advancing moraine.

A moraine is a buildup of dirt and rocks displaced by a glacier as it moves. It can be pushed out to the sides as a glacier charges through, it can be a trail of clumpy dunes left behind once the glacier has retreated, or it can be sediment actively swept along in front of an advancing glacier as if it were a broom collecting dust and debris. Moraines give glaciers stability and allow them to stay grounded as they run downhill.

Russell Fjord became Russell Lake in 1986 and again in 2002 because Hubbard Glacier’s moraine came up against Gilbert Point and sealed off the fjord.

In 2002, for example, Russell Fjord couldn’t drain out the runoff water, and Russell Lake rose 0.8 feet a day until the water pressure eventually broke through the dam naturally created by the ice and moraine, forcefully draining the lake back into a fjord (fun fact: this event is called a glacial lake outburst flood).

If Hubbard Glacier keeps advancing, it’s anticipated that Russell Fjord could be permanently closed off by a glacial dam anywhere around or between 2025 and 2043.This could cause future problems for the town of Yakutat which depends on the fjord and would be directly impacted by the flooding.

​​The Sublime Beauty of Hubbard Glacier Imagine all of the history a glacier has been around for – they’ve existed since the ice age as part of the water cycle. Even the snow and ice in a glacier is older than us, although not exactly ice-age-old. It takes about 100 years or less for the glacier flow of snow and ice to traverse the entirety of a glacier. 100 years for ice to make its way down to the terminus and drop off of the edge in grand, collapsing sections to go back to the water and start again.

Natural wonders like giant glaciers help us to get our lives back into perspective, to prioritize. We need those moments every now and then. Hubbard Glacier has flowed and recessed through the invention of the light bulb, the first man on the moon, and flooded Russell Lake during the same year American Idol premiered. It still exists in all its splendor today – a raw, natural monument of crystallized snow upon the earth.

Hubbard Glacier has calved and frozen and grown in a continuous cycle for thousands of years. There’s a kind of power in old things, in age itself – it’s a reminder of how long the world went on before us, and how – inevitably – the world will go on without us. Glaciers have an intrinsic value in their beauty and existence, to bring us back to the strength, resilience, and patience of the outdoors.

There’s a stunning solitude in miles of quiet ice. Gazing out at something bigger than you, deeper than you, older than you – it inspires profound thought, and for a second helps you see your place in the universe.