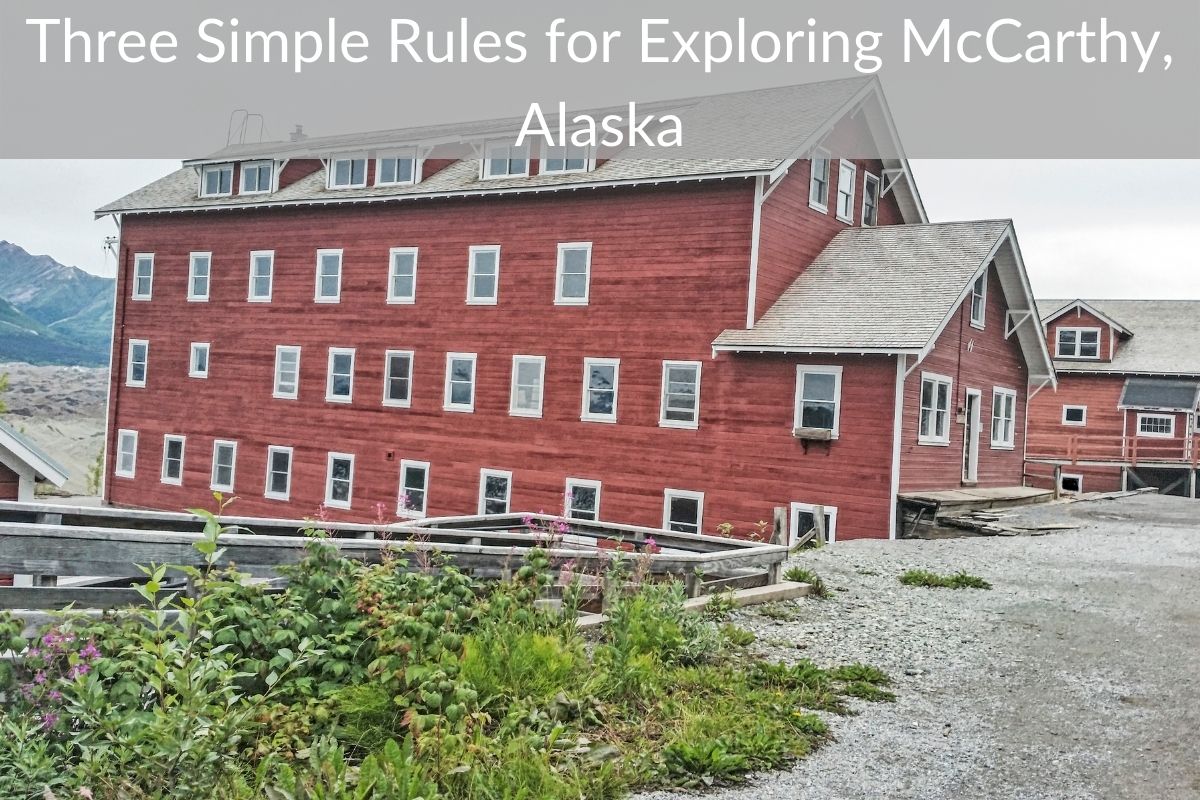 Alaska’s deep southeast has a gravel road, winding along a remote stretch of wilderness with ravines, sharp turns, and sections washboarded by the wind and rain. It can be a rough drive for city cars, and rental companies often ask that you avoid the road entirely, or risk violating your rental agreement.

At the end of the road is a small town, barely populated, next to a ghost town, next to two of Alaska’s national parks, each connecting to the largest non-polar collection of ice in the entire world.

Two towns, few people, and lots of ice – and it’s one of the greatest places to explore in the entire U.S. You have to go. You won’t regret it.

Getting to Wrangell-St. Elias, however, isn’t the only reason to visit McCarthy. There’s history, danger, and solitude here that can’t be missed if you’re spending time in Alaska.

If you want to enjoy it, though, you’re better off doing some prep work.

1. Know the History – it Makes Everything Better

Next to McCarthy is a ghost town, with several strenuous – and occasionally treacherous – hikes that begin in deserted main streets, and end in abandoned mines. It’s fascinating to explore on its own, but far more fun if you know how the towns arose, thrived, and suddenly perished.

Well over a century ago, early American entrepreneurs discovered copper deposits in the mountains next to present-day McCarthy. A few years and several million dollars’ worth of investing later, the town of Kennecott sprung up overnight, and miners toiled for the next two decades.

McCarthy was right next door, and had two advantages over Kennecott – it could sell alcohol, and it could provide other certain amoral activities. Kennecott could not, due to prohibition. Therefore, obviously, most of the miners hung out in McCarthy when they could.

The mines eventually closed, and the town was deserted. McCarthy itself survived as the gateway to one of Alaska’s prized national parks, which was declared some years later. The park itself owes a debt to McCarthy and those miners, for much of the early enthusiasm for exploring the area came from the population boom that followed the mining.

Nowadays, of course, McCarthy is quiet, and Kennecott is deathly silent. The mines are still there, and the buildings, and the trails to get there, each untouched by the safety committees and mobs of tourists that make most places a bore to explore.

Speaking of exploration, you’ll want to be prepared. That brings us to rule #2.

One of the prized trails in the ghost town of Kennecott is the hike to Erie Mine, which, at one point, hugs an ice cliff that shoots nearly 7,000 feet straight down. It’s quite exciting. It’s also not the kind of hike to do distracted or exhausted. That, frankly, is Kennecott and Wrangell-St. Elias in a nutshell.

The trails here are gorgeous, and somewhat treacherous. The ice is difficult, and has a tendency to isolate novice hikers. The mountains reach to extremely high altitudes, and require hiking gear and skill to scale. Everything here is fun and memorable, but it’s not always easy.

Be smart, and you’ll be fine. But be smart.

If you’re looking for danger and excitement, however, and you’re smart enough to explore with seasoned experts, there’s more than enough here to keep your adrenaline pumping.

Let’s start with the easiest.

There’s not much here, save for a scenic walk, a gift shop, and a large deck to sit, talk, read, or just enjoy the silence. If that seems boring, well…that’s the point. ‘Quiet’ is one of the things that both visitors and townsfolk cherish. There’s plenty of bustle down the highway in Anchorage, and plenty of danger the other way to Wrangell-St. Elias. McCarthy is for walking, resting, and renewing.

If you want a glimpse into a more hectic past, however, ask a guide – especially any of those giving daily tours of McCarthy or Kennicott. During the mining days, McCarthy was a one-stop shop for brothels, bars, stores, pool halls, and theaters. The remains of some of those buildings are still standing.

If you’re up for a drink yourself, there’s always McCarthy Lodge & Golden Saloon, or Kennicott Glacier Lodge just down the road. It won’t get as rowdy as the mining days, but the views of Alaska’s wild are still the best way to enjoy a beer or spirit.

This is a must-see if you’re going to explore the mining trails. The museum goes far beyond simply explaining mine history with the standard set of maps, diagrams, and old mining equipment – though, of course, all these things are included. It also contains a reading room full of books and documents that outline the more detailed aspects of the area’s history. Stop here, and you’ll better appreciate everything you see afterwards.

Almost every national park in Alaska boasts a helicopter tour or two. If you want to see the glaciers, mountains, and some of the wildlife – including bears – without the exhaustion, this is the way to go.

You’ll take in the vistas from just offshore, or floating downriver, usually with the commentary of an expert guide or ranger

You’ll need a license to fish, but those can be obtained easily online if you plan ahead. So far, we’ve covered easy hikes and leisurely tours. Here’s where it starts to get difficult.

There’s class I, II, and III rapids in the area, so expect to do some paddling.

which is exactly what it sounds like. Sign up for a tour, pack your raft, hike it to the water, and then explore some of those same class I, II, and III rapids. Nothing else combines hiking and paddling in this way.

This is later on the list because, if you recall, some of these trails are treacherous. Hike to any one of Kennecott’s abandoned copper mines, either Bonanza, Erie, or Jumbo. The Erie hike is the most dangerous, passing right atop the 7,000 ft. Stairway Icefall. It’s great for pictures, but if heights aren’t your cup of tea, you might want to avoid this one.

Wrangell-St. Elias has more trails and climbs than you could possibly cover if you wanted to. Always hike with others, and never hike unprepared. Even the ice floes here can be tricky, and it’s common for inexperienced hikers to reach the top of Root or Kennecott Glacier and find, surprisingly, that they can’t get back down. Take an expert, and have the right equipment.

As always, we save the best for last.

or any number of peaks in the preserve. Mount Blackburn is an old shield volcano, the result of swift-flowing lava stretching far beyond the eruption site. The result is a peak that slopes gradually upwards. Blackburn is an impressive climb, and sought everywhere by climbing enthusiasts. It’s the fifth-highest peak in the US, the 12th highest in North America, and if you reach the summit, you’ll be one of only 50 or so groups that have ever done so.

If you recall, we briefly mentioned that Wrangell-St. Elias owes a debt to the old miners. The total debt is owed the miners, Mount Blackburn, and one early alpinist named Dora Keen, who was so obsessed with scaling the volcano that she enlisted the help of local miners and their equipment to do the job. Since then, climbing enthusiasts have been scaling their way to the top, and the mountains’ popularity encouraged the eventual founding of Wrangell-St. Elias National Park and Preserve.

Mount Blackburn is an Alaska Grade 2 Climb, which basically means that a physically fit novice can make it to the top if he or she pays attention to a guide’s instructions. It’ll cost you just over $5,000, but you’ll be joining the ranks of a select few, and the vistas from the top are simply unforgettable.3. Take Your Time, and Be Rewarded

Somewhere in the middle of Kennecott Glacier is something called a nunatak, or glacial island. This one is called Packsaddle Island, and it’s a steep mesa of rock that juts straight up and out of the glacier. It’s lonely, deserted, and gorgeous, and the perfect destination for one of Wrangell-St. Elias’ many glacial hikes.

Packsaddle Island, like most things in McCarthy, Kennecott, and Wrangell-St. Elias, is something of a hidden gem. Take the time to find it, and you’ll get an experience available to few others anywhere in the world. Most of the great discoveries in this area will cost you some planning, time, and sweat. Every one of them will reward you. Put in the work, and you won’t be disappointed.

Read the history, know your limits, and take your time. McCarthy is worth it.