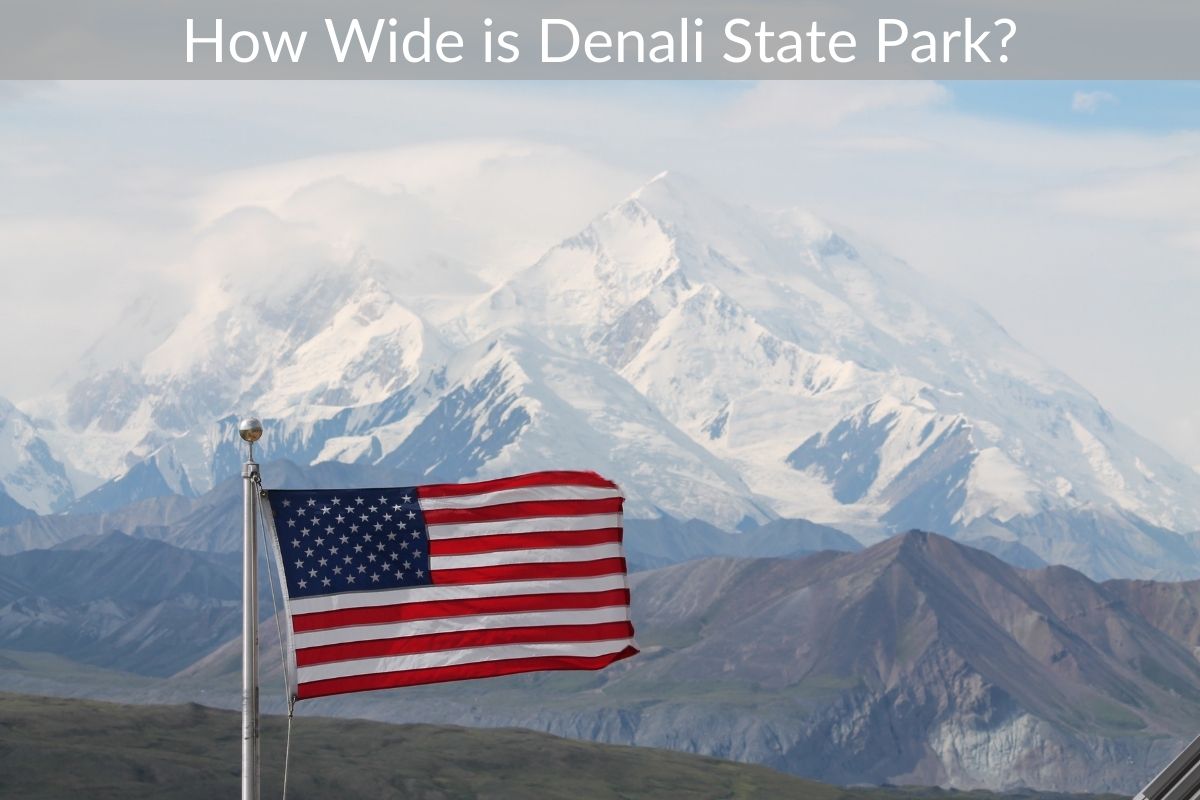 Alaska is known for its wide open spaces, largely untouched by the progress of Man. Among the widest and most open of those spaces is Denali State Park.

While it’s not as big as its counterpart, Denali National Park, the state park encompasses 325,240 acres, which, to put it in perspective, is about 246,393 football fields or almost double the size of New York City.

But the question remains: what’s so special about the park that it requires so much space?

Denali State Park has a large and diverse population of wildlife, which includes bears, moose and wolves, as well as less intimating animals, such as hares, porcupines and otters. In addition to animals, the park also has a plethora of plant life, which primarily consists of the white spruces and paper birches that make up the forests. There’s also the tundra, which contains mostly cotton grass.

Even though it may be tempting, the park’s official website encourages visitors not to approach the wild animals, and even to regularly make noise that will warn them of your presence. Hopefully, this prevents the startling of nearby animals (you won’t like them when they’re startled). Carnivores such as grizzlies aren’t the only creatures to keep on the lookout for. Moose are deceptively dangerous, as they can weight up to 1,600 pounds and are known to charge at anything they find threatening.

The park can also boast of being a hotspot for more than 130 species of birds from around the globe. The birds use the park for their breeding and migration purposes in the spring. Some of the birds you might see include the snow goose, the bald eagle and the great-horned owl. This makes the park prime real estate for those photographers with an itchy trigger finger.

Aside from the lifeforms above the ground, the park’s waters are home to a number of unique fish, including salmon, rainbow trout and whitefish, among many others. While fishing is allowed, there is a ten-fish limit per day and many other regulations to keep track of. The numerous streams and Byers Lake offer the best chance at catching fish.

For all the amphibian fans out there, there only happens to be one species in the park. That brave iconoclast is the wood frog. Given that reptiles have a harder time enduring the cold, it should come as no surprise that wood frogs are the lone survivors, as they’re uniquely equipped to deal with the temperatures in a fascinating way. As the temperatures turns to freezing in the winter months, the wood frog’s body begins to convert stored glycogen into glucose, which minimizes the effects of dehydration. This allows the wood frogs to survive being completely frozen and inanimate throughout the winter. Come spring, the wood frogs thaw out and go on with their lives.

Not Only is it Wide, but also Tall

Not only is Denali State Park one of the largest state parks in terms of acreage, it also happens to be the tallest. This is thanks to its namesake, Denali, known as Mount McKinley until its name was changed in 2015. Denali is the highest mountain peak in North America, coming in at a whopping 20,310 feet, which is almost a thousand feet higher than the runner-up, Mount Logan, located in Canada. This makes sense, given that “Denali” is the Tanana Indian term for “the high one.”

In addition to Denali itself, the mountain is surrounded by massive glaciers, which get up to 38 miles long and four miles wide. Unlike the mountains, which aren’t known for their movement, the glaciers can movie as slow as a few feet every year or as fast as a few feet a day. These glaciers feed into the Chulitna River, which cuts through the center of the park. Not only does the river offer a fantastic view, especially when set against the mountains, but it can also be used for rafting.

Along with the mountains and glaciers, the park is also home to Byer Lake, which has its own campground for those interested in getting up close and personal with the park. The lake offers opportunities for fishing, as it holds burbot and trout. Kayaks and canoes are available to rent on location, as well. In fact, USA Today’s Lisa Fritscher ranked Byer Lake Campground among the best places to stay when visiting the park.

How’s the Weather Up There?

Unlike some of Alaska’s coldest parts, the temperatures of Denali State Park are tempered by the nearby ocean waters to the south, which run warm. This allows the summer weather to keep its average temperature in the 60s. In the winter, however, the highs can be as low as 0 degrees.

In a year, the park can get around 30 inches of rainfall and 180 inches of snowfall. The snow provides plenty of opportunity for snowshoeing and cross-country skiing. Certain areas of the park even offer groomed trails for those looking to make like a glacier and punch it.

The winter months can result in some harsh weather conditions, so the park encourages hikers to be prepared by bringing their own quality equipment, being physically fit and having pertinent knowledge. For instance, the park’s streams can rise without warning as the day goes on, due to the sun causing the ice and snow to melt.

As far as the weather of Denali, specifically, the upper half of the mountain can reach temperatures as low as -75 degrees, which can freeze a human in an instant, according to Kim Ann Zimmerman from LifeScience.com. So if you’re thinking about climbing the mountain, pack extra socks and maybe a blow-dryer. You might need thawing out.

The Best Ways to Experience it All

Because of Denali State Park’s large size, it may seem somewhat daunting if you’re looking to visit and get the full experience. The trails can help in this regard, as they guide you through a large portion of the park and provide plenty of sightseeing opportunities. Here’s a list of the trails that can help in seeing everything the park has to offer.

The K’esugi Ridge Trail is the park’s most popular trail, as it offers a 360 degree view of the Alaska Range and the Talkeetna Mountains. The trail itself goes for 22 miles and reaches a high point of 3,550 feet.

Be careful, however, for the trail is challenging and bad weather can make forward progress all but impossible. The park’s official brochure suggests that hikers attempt the trail between late June and mid-September for the best results.

Not far from the trail is the Alaska Veterans Memorial, which honors the Army, Navy, Air Force, Coast Guard and Marine veterans of Alaska, each of whom is represented by their own upright, stone slab. There’s also separate plaques for specific tribute, one of which is for the USS S-26, which was the third submarine lost in World War II. The memorial has its own information center and gift shop, so there’s plenty to learn and plenty of mementos to remember your trip by.

As its name suggests, the Byers Lake Loop Trail surrounds Byers Lake. It’s 5.3 miles long and offers several scenic views of Denali. Byers Lake can be used for fishing, kayaking or simply getting warm in the Public Use Cabins at the Byers Lake campground.

This trail is perfect for those who would like to go hiking, but aren’t looking to deal with any extreme conditions or veer too far from the campgrounds. The elevation gain is less than 100 feet.

For those interested in days gone by, the trail offers a close-up view of an old, out-of-use cabin, which is slowly becoming overrun with foliage and even has a few trees bursting out of its roof.

The Troublesome Creek Trail runs for almost 12 miles and has an elevation gain of 2,150 feet. It follows along Troublesome Creek, which can live up to its name during salmon season, as bear sightings go up considerably.

This trail was closed after it became damaged during a storm in 2006, but has since been re-opened, even though repairs are still an ongoing issue.

The K’esugi Ken Campground Complex is the newest edition to the park, having opened to the public in 2017. The campground includes 32 RV campsites, 10 walk-in campsites, two public-use cabins, one group campsite, and paved roads to tie everything together. There’s even a ranger station on location, which gives the site an extra feeling of safety.

In addition to basic living conditions, the campground also has a pavilion, complete with picnic tables, bathrooms and a fireplace to keep warm while you’re eating.

There’s even a new trail to go along with the new campground, that being the Curry Ridge Trail. This trail reaches a height of 1100 feet and allows access to the area surrounding Lake 1787.