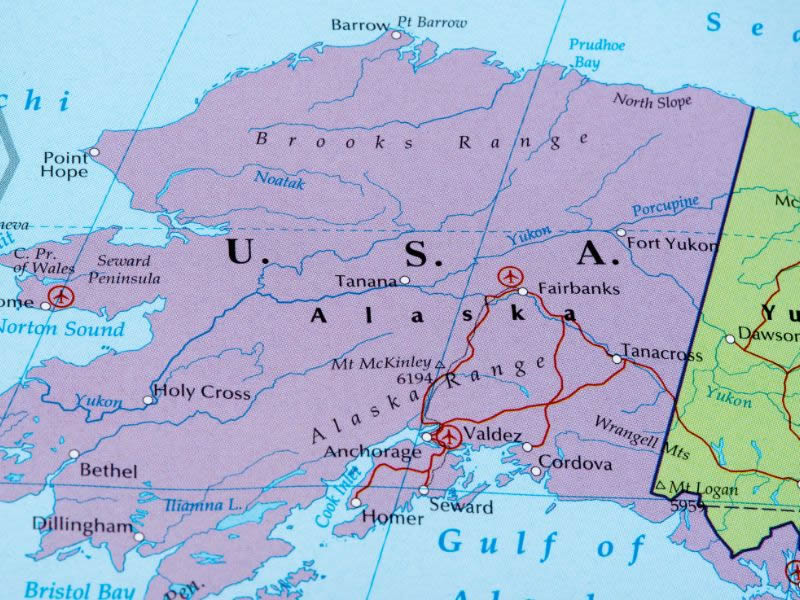 There really isn’t anything better than getting up close and personal with The Last Frontier.

Alaska and its wilderness have many stories and secrets to be told to all those who travel and explore within her beauty.

One challenge of exploring Alaska as its inhospitable terrain which makes travel by car and train troublesome.

Fortunately, there are two railroad companies in Alaska that will allow you to explore its largest cities and national parks.

Alaskan Railroad and the White Pass and Yukon Railroad companies take passengers from all over the world to enjoy the beauty of the rugged landscape the state of Alaska has carved out for itself over the years. Passengers can travel by train between Fairbanks and Seward, as well as from Skagway.

Although Alaska boasts many beautiful train stops, the rail network can only cover a relatively small.

Fairbanks is the most northernly station, and Skagway the most southernly.

In this article we’ll look at the two railroad companies of Alaska, where they travel and just how much of Alaska a person can travel by train.

Where can you travel to by train in Alaska

Alaska has many beauty and scenic spots.

It also has thriving business centers, urban metropolises, the largest mountain in North America and the infamous northern lights.

All of these are accessible by train in Alaska.

Two of the largest cities in Alaska are Fairbanks and Anchorage.

Trains regular run the Fairbanks to Anchorage route. These train services are known as the Denali Star and the Aurora Winter Train.

Both services are operated by the Alaskan Railroad Company.

Stopping at any station in between often requires an overnight stay, unless of course the stop is early on the route and passengers can pick up the service running in the opposite direction back to their departing station later the same day.

One such stop along the route is the Denali National Park, home to the famous Denali Mountain.

In fact, Denali Mountain reaches further into the sky than even Mount Everest, but Mount Everest is taller as its base is closer to sea level.

Passengers can take the Coastal Classic route, also operated by the Alaskan Railroad Company, from Anchorage to Seward, which is the gateway to the Kenai Fjords.

The visitor center is in the heart of the Seward town explaining how to charter further travel onwards into the park.

If traversing into the mountain range is more your thing, the White Pass and Yukon Railroad in the very far south-east corner of Alaska may be a better choice.

This peak season only service caters for tourists to explore the mountains include the Klondike, famous for the gold rush in the late 1800’s, as well as the various hikes and campsites around the area.

When is the best time to travel Alaska by train

Much of Alaska is cold, very cold.

Due to its location far above the equator line, it also means during the late Autumn and winter months there is little daylight.

Fairbanks in fact has 22 hours of darkness in late December.

These are not ideal times to explore Alaska by train.

This means Spring and Summer months offer the best times to explore the landscape in all its beauty.

Many people who travel to Alaska want a chance to experience the Northern Lights, which isn’t possible to see during daylight of course.

For the perfect time to visit Alaska with many hours of daylight for sightseeing, and enough hours of darkness for the chance to catch the northern lights, is early May and September.

Which train companies operate in Alaska

Both companies we have covered quite extensively in this article already.

The Alaskan Railroad Company was founded by the U.S. Government to allow residents to travel and trade between cities and towns and enable those living remotely to access supplies.

Both residents and tourists alike use the Alaskan Railroad Company services.

For those who have seen travel brochures in Alaska depicting carriages with panoramic windows and a la carte dining options will undoubtable have been seeing an Alaskan Railroad Company route.

The White Pass and Yukon Railroad company offer a more traditional steam train offering and is used exclusively by tourists keen to explore the mountains.

The Alaskan Railroad Company operate all year road with routes such as the Denali Star, Coastal Classic, Glacier Discovery Route, and the Aurora Winter train.

The White Pass and Yukon Railroad company operate only in peak season months and have routes such as the White Pass Summit Excursion.

What is the longest train route in Alaska

It takes 10 hours to reach Fairbanks from Anchorage and the route stretches for a total of 356 miles.

This route is also home to the Denali National Park Station where passengers can stop off for the night and explore the park, or witness the majesty of the wildlife, mountains, and lakes onboard the train.

So much of the U.S. can be explored by train. Simply join any number of train networks and adventurers can travel across state, or between multiple states. Alaska though is...