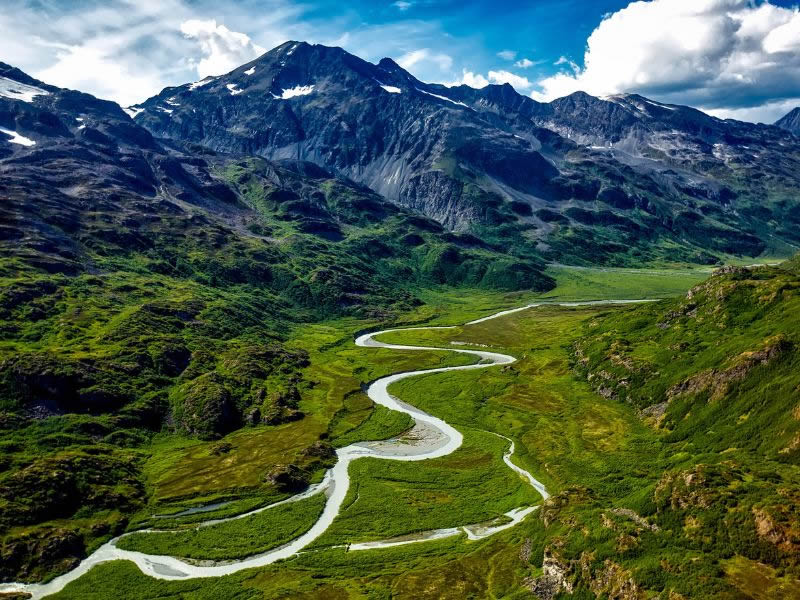 So much of the U.S. can be explored by train.

Simply join any number of train networks and adventurers can travel across state, or between multiple states.

Alaska though is different.

Positioned along the border of Canada, and with no direct road or train access between Washington and Alaska, the only way to travel between the state closest to Alaska is through the border.

Travelers need to start and end their train journey from within Alaska to enjoy the beautiful scenic routes it holds.

Due to how remote Alaska is as a state, and owing to its northernly position from the equator, it means much of Alaska is out of reach of easily accessible transport, including trains.

From the Denali Star route to the Glacier Discovery Route, Coastal Classic, White Pass Summit and more, Alaska has many beautiful scenic train routes and rides operated by the two main railroads of the state.

Although only a small area of Alaska can really be explored and seen by train, those areas have some amazing scenery, lakes, mountain ranges and an abundant of wildlife to spot along the way.

Not only that but two routes take you directly in the path of two of Alaska’s National Parks!

In this article we’ll cover the best scenic train rides of Alaska, when to travel and what to see.

Alaska, also known as The Last Frontier, has some of the most beautiful terrain in all North America.

Due to its location, and almost constant darkness during the winter months, not many get to see it, which is a shame as the inspirational mountainous landscape should be seen at least once.

Fortunately, the number of routes into Alaska by air, cruise ship and road (through the borders of Canada) make reaching Alaska easier than ever.

Once there, here are 5 of the best scenic train routes of Alaska to explore.

The famous Denali Star route is probably the best way to explore Alaska by trains.

Daily trains run between Anchorage and Fairbanks, and between Fairbanks and Anchorage.

The 20-hour return route, which will require an overnight stay in either Anchorage or Fairbanks covers the greatest distance of any train route across its 356-mile journey.

This popular route is operated by the Alaskan Railroad company and passes through the inspiring Denali National Park – and even stops there.

The Denali Mountain, which is the tallest mountain in North America, is one of the highlights along the route.

The best viewing is on a clear day to see the peak, and just how high it reaches, but clear days in Alaska aren’t guaranteed!

It is worth noting there is only one train per day that passes through each station along the route in each direction. This means overnight accommodation will need to be booked in advance if you plan to leave the train at any stop.

The alluring name of the Glacier Discovery Route certainly lives up to its name and expectations.

Despite only a 2-hour train journey travelers will have to wake early and be ready as only one train leaves a day from Anchorage to Whittier (and vice versa) and leaves around 9:45am!

The early start is most definitely rewarded.

Stunning glaciers, lakes and mountain terrain casually flow past carriage windows as passengers are escorted through Alaskan beauty in all its ruggedness.

Fortunately, a return this trip on the Glacier Discovery Route can be done in a single day.

Travelers can alight at Whittier to explore at 1:15pm and then catch the return train back to Anchorage that evening.

This is a great scenic Alaska train route to do if adventurers are short on time.

If Glaciers are not your thing, then maybe the Coastal Classic scenic train route by Alaskan Railroad will appeal more.

This 4.5-hour and 114-mile journey is a laid back scenic coastal train route between Anchorage and Seward.

Mountain terrains and miles and miles of stunning coastal scenery await all those who climb onboard.

Seward is the entry point to the Kenai Fjords National Park, and where the National Park visitor center can be found with all the latest options to enter the park and enjoy all it has to offer by either coach, plane or various boats and mini cruises.

The Alaska Sealife Center at Seward is a great to head to whilst you are there!

This scenic train route starts in Skegway in the very Southeast of Alaska, up to White Pass Summit at an elevation of 2,900 feet.

During the ascent into the mountainous terrain, you’ll get a bird’s eye view of Skegway and lakes, as well as spotting the many different wildlife during this 3 hour round trip.

As this scenic train route operates almost exclusively for tourists it only operates in spring and summer and the start of autumn and does not run in the cold dark winter months.

This train ride is also great for seeing the route and place the thousands of pick-axe welding hopefuls went looking for gold in the Klondike Gold Rush of 1898.

The magically titled Aurora Winter Train covers the exact same route as the Denali Star, between Anchorage and Fairbanks, but only operates during the dark winter months.

It is mainly a route to serve locals traveling between the cities and towns for work, meetings, suppliers or to see friends and family.

As Alaska plunges into darkness for up to 22 hours a day during the winter months, it leaves very little daylight to see the Alaskan landscape and beauty.

Unfortunately cloud coverage in Alaska happens more often than it doesn’t, and a full moon happens just once (and sometimes twice) a calendar month, it doesn’t give many opportunities over a year to see Alaska this way but the calming blue hue tones across the Alaska wilderness can be breathtaking.

It wouldn’t be worth traveling all the way to Alaska during a period of a full moon for a chance to see this spectacle, but for those already in Alaska and need to travel between Anchorage and Fairbanks, and can do so during a full moon, it can be a sight to behold.

When is the best time to travel Alaska by train

If these train routes have sparked an interest, you may be wondering when the best time to pack and go is.

Between the end of April and beginning of October are generally considered the best time to travel to Alaska and take a trip on one or more of the scenic train rides both railroads have to offer.

It is worth noting that on the summer solstice, which is the 21st June, Alaska can have up to 22 hours of daylight.

This is great for sightseeing but not so good if you want to have the chance of seeing the Northern Lights too.

To combine a decent number of hours of daylight for scenic gazing, and enough dark hours to try and catch the elusive Aurora Borealis, it is best to travel beginning of May and September.

Which National Parks in Alaska can be reached by train

Two of Alaska’s main National Parks can be reached by train.

Both the Denali Star and the Coastal Classic route are operated by the Alaskan Railroad company.