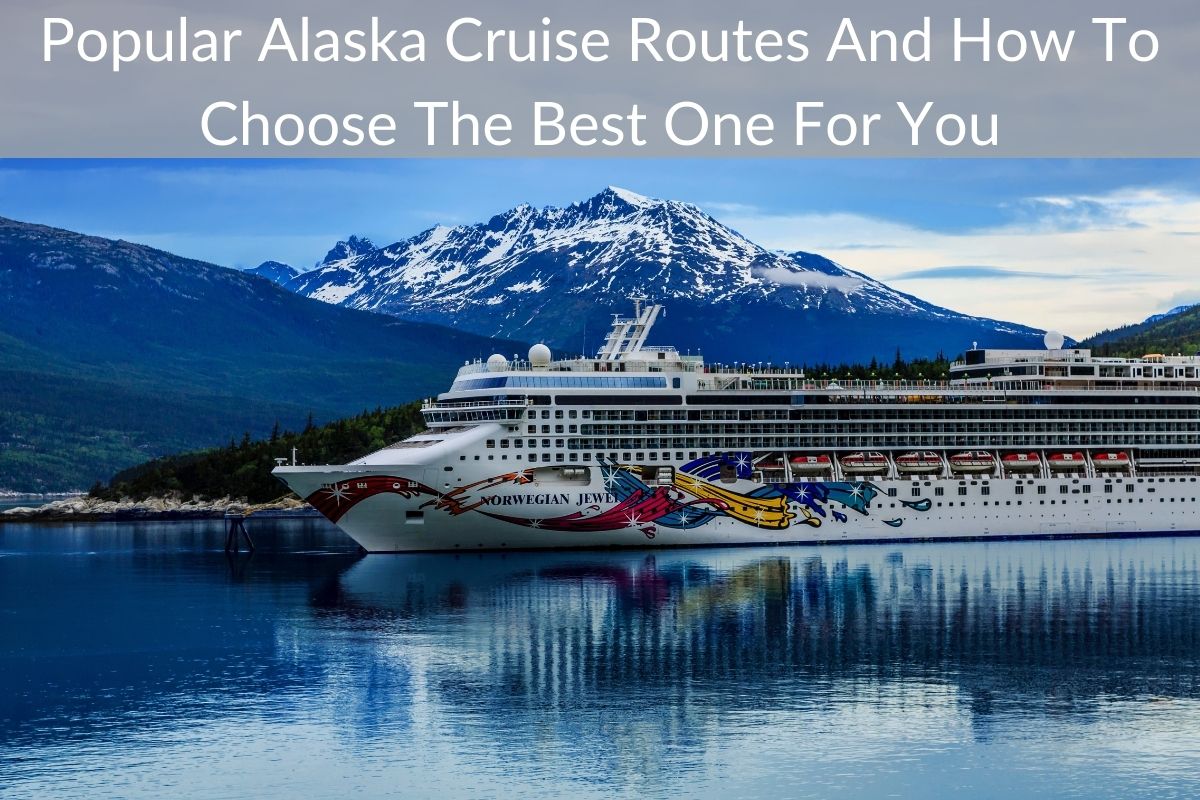 There are over 34,000 miles of tidal shoreline in Alaska just waiting for you to discover. Sure, Alaska cruise routes might vary from company to company, but the views are anything but inconsistent. Glaciers lurk between the shadows of rugged mountain peaks. Lakes glisten with the amber glow of approaching dusk. Fjords, dense with rainforest, tunnel their way inland towards sheets of ice as clear as glass.

And above it all, watching in silent contemplation, stands Mt. McKinley, North America’s highest peak.

Of course, that’s just the topography.

It really doesn’t matter which one of the Alaska cruise routes you opt for, the wildlife always astounds. Humpback whales share the waters with Pacific white-sided dolphins, salmon shark, and Beluga. In harbors dotted across the Alaskan coast, sea lions, otters, and seals hunt, laze, and frolic.

Bears lumber from the forested coastline in search of berries, trout, and other tasty treats. Caribou, elk, and moose throw wary eyes at packs of roaming gray wolves. Dall sheep share the highlands with over 300 varieties of nesting birds.

Which is all well and good, but it does present a would-be traveler with a problem. With so much to see and do, fitting everything in is close to impossible.

Choosing the right trip is, indeed, no easy task. The list of available Alaska cruise routes is not small. Cost, time, and starting location all play their part in the final decision.

But it’s just as essential to get a feel for the lay of the land before making a decision. A checklist of must-see attractions helps narrow down choices. For some, wildlife sightings are a priority. Others might set their hearts on specific locales such as a trip to the State Capitol Juneau or a visit to the Hubbard Glacier.

So with sea sickness patches ordered and thermal underwear packed, a simple choice presents itself. Should you book a round trip or begin your journey in Alaska?

Flying into Whittier, Seward, or the state capital allows for a seven-day cruise down to Vancouver, stopping off at several choice locations without treading old ground.

Round trips allow for more extended rest periods and offer increased flexibility. With these more circuitous Alaska cruise routes, travel from anywhere on the west coast is possible. Still, Vancouver, Seattle, and San Fransisco remain the most popular points of embarkation.

There is no such thing as a definitive list of things to see and do on a trip to Alaska. Not every cruise has time to stop at every single location.

Even so, you might be surprised by how much the cruise operators manage to fit in, even on a short cruise. There are, after all, some sights that pretty much everyone is going to want to see.

The Inside Passage is a coastal route that weaves between the islands of the Pacific North West. Steaming north from Vancouver or Seattle, the course takes you through some truly stunning scenery.

Glacier-carved fjords flanked by pristine forest rest against a background of snow-capped mountains. Untouched islands drift by as bald eagles soar above cliffs of towering granite sprinkled with waterfalls, coves, and bays. There’s a reason that almost every single one of the Alaska cruise routes on the market spends at least some part of the journey here.

It takes about two days to cross this stretch of water, and a stopover at Ketchikan is the norm on most routes, although some ships take you to Prince Rupert first.

All but the most bespoke of Alaska cruise routes anchor at the state capital of Juneau at least once per journey. Here, travelers can indulge in some fine dining, go on the fishing trip of a lifetime,shop, whale-watch, and perhaps even brave the tramway up to Mount Roberts.

Topping most peoples lists, though, is a tour of the breathtaking Mendenhall Glacier, located just 13 miles away from downtown.

Not all Alaska cruise routes make a pit stop at Skagway, a town with a population of just 1,100, that is situated some 100 miles north of Juneau. The rarity of visitations is something of a pity really; the rich history of the area makes for a pleasant contrast with the hustle of modernity.

Here, many of the gold rush-era buildings remain. A stroll down this town takes you back to the pioneering days of the 19th century in ways few other places can.

West of Juneau sits a 65-mile long fjord that marks the outer age of the 3.3 million acres Glacier Bay national park. Fed by over a dozen tidewater glaciers and flanked by the world’s highest coastal mountain range, the fjord is a sight to behold indeed.

Restrictions on the size and number of cruise ships allowed to steam through the area mean that many cruises bypass it altogether. If scenery is your thing, it might be best to book yourself on one of the Alaska cruise routes allowed passage.

For most cruises, Kodiak Island is just a little too far off the beaten track to warrant a visit. To get there, you need to sail northwest, past the College Fjord, then west, across Anchorage and the seaside village of Seward.

Kodiak Island is generally the last stop of any round trip and the most westerly point of most cruises. For that reason, cruises that include a visit to the home of the largest land carnivore on the planet tend to be longer than most. A round trip from Vancouver or Seattle generally lasts 12 to 14 days.

Of course, these are just some of the highlights that help make up any one of dozens of Alaska cruise routes. Planning a trip should never feel like a game of Tetris — things should just fit into place automatically. At least, that’s the theory. It’s often trickier than it might at first seem.

Fortunately, Cruise Critic can help with that. Selecting Alaska as a destination allows you to filter results tailored to your own needs. You can choose cruise lengths, departure location, and even indicate which ports of call you want to make.

Once that is settled, all you need to do is peruse any one of the hundreds of Alaska cruise routes listed on the site.

The trip from the Golden Gates to Alaska and back takes only 11 days. Reaching Juneau on day four, this Princess cruise makes stops at Skagway then passes across Glacier Bay before arriving at Sitka. From there, the ship sails South to picturesque Victoria before heading back to San Francisco.

The Vancouver to Seward journey is a great way to take in as much of what Alaska has to offer in the shortest possible time. Vancouver is, after all, only one day’s sail from the Inside Passage.

A pause at Ketchikan — the salmon capital of the world no less — allows you to stretch your legs before you head deeper into the Alaskan hinterland. Making its way past the Icy Strait Point, the cruise stops at Juneau, Skagway, and then up to the spectacular Hubbard Glacier.

The last leg of the trip takes you to the charming town of Seward, one of Alaska’s oldest communities. And from there, you can fly back home in comfort.

Seattle to Skagway and back

Another popular embarkation point, Seattle sits only a little south of Vancouver. Traveling from this point helps to maximize the time spent enjoying Alaska.

An eight-day cruise sees you sail north, reaching Juneau on day three and spending the next two days at Skagway and Glacier Bay respectively. The ship then heads south to Victoria before arriving back in the Emerald City itself.

If you’re lucky, you might be blessed with a little extra time and perhaps a little extra money. If so, a more extended cruise can provide a memorable trip free of the compromise that shorter journeys often demand.

This 14-day journey with Holland America begins in Seattle and loops all the way around to Kodiak before heading back via Sitka. Things kick off with a trip through the Inside Passage. While there, you’ll experience the rustic charm of Juneau, the historical nuance of Ketchikan, and the stunning vistas of the Icy Straight.

Thrown into the mix, however, are a few wildcards.

Stopping off at Homer for a spot of halibut fishing or a trip to the spa is welcome enough, but you also get to experience the sights and sounds of the state’s most populated city, Anchorage.

The final leg, a layover at Kodiak Island marks a fitting conclusion to an already incredible trip.

The best way to maximize time spent in Alaska is to fly into the state first and then make your way back home the long way around.

Such is the case with Sebourne’s ultimate, 15-night fly-cruise package. Starting from Seward and ending in Seattle, the trip is as close to “all-in” as you’re likely to find. A four-day cruise across some stunning coastline takes you to the Inian Islands, Haines, Juneau, Sitka, and Ketchikan.

But you also get to explore some places most other Alaska cruise routes avoid. The tour includes a visit to the Misty Fjords national monument and an overnight anchorage at the City of Wrangell.

Later, you’ll stop at the charming village of Klemtu — home of the Kitasoo Native Band — and spend some time in the oldest community on Vancouver Island, the heritage town of Alert Bay.

And that’s just for starters.

In truth, there are so many different Alaska cruise routes to choose from that listing them all isn’t possible. Not that it would help all that much if we could do so. Because the trick is to find a cruise that works for you — one that matches your budget and lends itself well to your busy schedule.

By setting yourself some hard parameters, you can take some of the stress out of choosing one route over another. And with that done, all you need to do is climb aboard. Well, that, and take a deep breath.

And prepare yourself for the northern adventure of a lifetime.